200Grs. We’ieh, a collaboration between Rana Haddad and Pascal Hachem, was born out of the idea of using wood off fall to produce a series of objects. The pieces are presented as part in parcel of an artistic collaboration as well as the results of long theoretical discourse dealing with the “objets trouvés “.

200Grs. deals with notions of scale, genuineness, as well as human/machine collaboration in order to produce unique pieces serving a multitude of miscellaneous functions. These notions along with a calculated balance of handwork and reliance on machinery, produced objects with an inherent sense of authenticity that is fully explored once the pieces reach their end users. Throughout the design and production, the designers acknowledged the local craftsmanship and know-how, a decision that directly impacted the final design and assembly of the series. Accordingly, 200Grs. took an active role in combating globalization in Beirut, Lebanon and promoting local artisans that have recently and increasingly found themselves in risk of foreclosure.

Pieces are made by carefully bringing together different types of wood, along with metal and in some instances rubber, textile or cardboard. Each piece falls within the general ballpark of 200g (the inspiration behind the name of the series) and carries the name of its precise weight. Fitting into a larger discourse of thought that has been present in both of the creators work, 200Grs. showcases functional, candid, and sober architectural items all while dealing with concepts of materiality, elasticity, tensions and balance. The produced objects are appropriated and manipulated by their users in a variety of ways, opening the door to countless interpretations and utilizations. Accordingly, 200Grs. embodies a discourse of dialogue between its creators and its end users, allowing each object to create unique ergonomic and emotional relationships with its future owner. 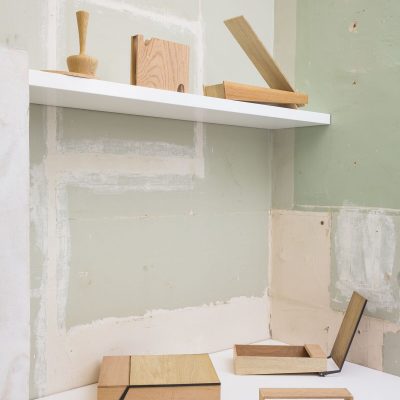